Useful or not, from you.
sgin in
vscode VS Code unins000.exe starts leading its own life, suddenly throwing a popup warning without user interaction

Issue details: I installed VS Code like 24 hours ago and shut down and started it a few times during the day, working to full satisfaction. But now, a couple of minutes ago, it randomly, while VS code was open in the background (taskbar), thrown an error without having actively interacted with VS code interface for a while. Only a .lua file was open.

The error seems to reveal that VS code was attempting to uninstall itself. Without my consent or direct action to set this in motion. Or maybe it was somehow, suddenly, writing the uninstall file while not supposed to, as the active usage scenario shouldn't relate to the uninstaller.

To understand my point, view the image of said warning below: 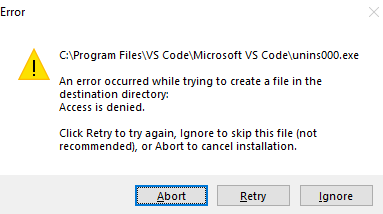 I clicked abort, and I'm unsure what would have happened if I clicked something else.. even though it may impact people that dismiss the messsage differently in a more severe way. I really didnt want to lose my perfectly set-up configuration/plugins, so I wasn't going to risk it just for the purpose of providing more info in a bug report.

I hope that even though it's a random and sudden issue and pretty trivial, you appreciate the report as it allows you to investigate scenarios in which the uninstaller can start leading its own life without user action. It's certainly a bug, I'm very aware of my menu and interface actions around the time that popup appeared.

<!-- Launch with code --disable-extensions to check. --> Does this issue occur when all extensions are disabled?: N/A (cannot find out since issue is random)

The user setup has a default location of somewhere in your user folder. If you'd like to install in Program Files instead, just use the system setup: https://code.visualstudio.com/docs/?dv=win64

I see, and I'll try running system version instead. If you're sure that will resolve the problem, you probably won't see me back here (unless for a confirmation).

Suggestion: maybe make the installer smarter and refuse to install into Program Files if it's the user setup wizard? Or show an additional warning if they select it, pointing out the risk of bugs like this. The problem can really disrupt user experience because the box can appear at a certain interval while you're coding. And I can imagine it's hard for most users to correlate it with accidentally installing the user version into Program Files.

Also, a step ahead, you could make a web installer that checks if it runs elevated (or can elevate itself on that system) and then downloads the right version; system or user wizard, to continue the installation with. To then only refuse installing an user version into Program Files. This process would remove the need for all that documentation relating to system vs user, and the warnings whether or not to run something as administrator.

Thanks for the help!